For most of 2017, I have been working on my Brighton Welcome Blanket project, a large scale, collaborative piece, which incorporates the verse carved on one of the Patcham Pylons at the entrance to Brighton:

Hail Guest. We ask not what thou art
If friend, we greet thee, hand & heart
If stranger, such no longer be
If foe, our love shall conquer thee

This verse appeals to progressive white Brightonians, like me, because it encapsulates something we feel is distinctive and characteristic about our city – its openness and acceptance of diversity, its willingness to provide sanctuary to those who don’t belong in the places they come from.

As I worked on this blanket, I photographed each crocheted word, sharing my progress on Facebook in order to encourage other people to take part by contributing their own textile squares. The slowness of working by hand with yarn means that there is time to develop an intimate relationship with a piece of work. I tried to reflect on the significance of each word and phrase as I went along.

For instance, when I had finished the word hand, I posted this on the Facebook group:

In Sophie NL Besse’s show, Borderline, there is a scene in which a young refugee is told, after travelling across Europe to Calais, that because his fingerprints had been taken in Italy, he must return there. His response is to take a lighter and try to burn away his fingerprints. For others, stranded in camps and sleeping rough across Europe and beyond, a photo of their hand sent to the grassroots Facebook group Phone Credit For Refugees brings in return the precious gift of a chance to talk with loved ones or summon help in an emergency. But this word is simply about a greeting, human to human, hand to hand. 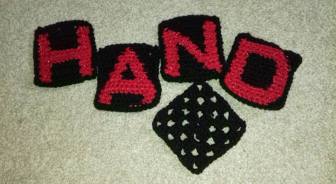 As I read and learned more about the situation of refugees and migrants in Europe and the UK specifically, I began to feel differently about the verse. Two thoughts have crystallised for me, as the blanket reaches its final stage.

Not asking means starting from the basic assumption that all humans are equal, and equally worthy of respect. It is a risky stance – as explained in the verse. There’s always a chance that you are unknowingly welcoming a foe into your home. But it is the only way to maintain your own humanity.

To say in advance that you will extend a hand of friendship to every visitor, without first questioning their status or motives, means that you relinquish your power to pick and choose who may enter. It means you opt not to see people from outside as a resource to be exploited or as victims to be rescued.

On the other side of the coin, not being asked is an experience that many progressive white Brightonians like me take for granted. It feels great, to be accepted at your word. We want to celebrate that feeling and that freedom, and share it with everyone.

But unfortunately, it is a lie.

The unpalatable truth is that the welcome we offer to people who turn up in Brighton, the UK or Europe is very far from the open acceptance suggested by the words on my blanket.

In reality, the experience of arriving in Europe or the UK is one of being asked repeatedly what your value is, and whether you can prove you meet the (arbitrary) standards we set for people to settle here.

We ask at the border, and we keep on asking. The UK’s hostile environment for “illegal” migrants is a system that is designed to bring the border into every aspect of day-to-day life.

We ask at hospital

From 23rd October 2017, hospitals and other providers of secondary health care will be legally obliged to ask people about their immigration status and to charge overseas visitors in advance for the treatment they need. 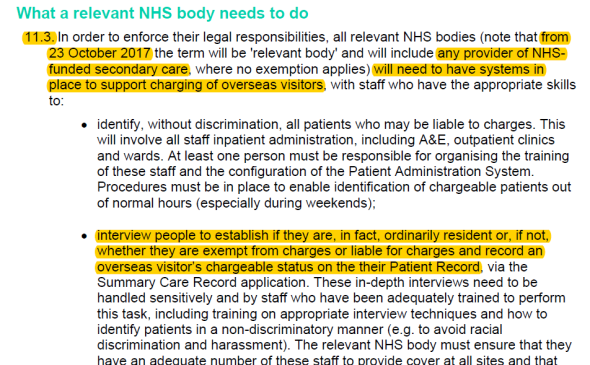 We ask at school

Schools carry out a pupil census every term. Campaigners revealed last year that since December 2015, the Home Office has had an arrangement in place to regularly request access to the data gathered for immigration purposes.

In September 2016, new questions about nationality and country of birth were added to the Schools Census. The purpose of gathering this data is nothing to do with ensuring adequate funding for schools or support for pupils with additional language needs. It is directly related to the hostile environment programme, as Against Borders for Children explain:

In 2015 then-Home Secretary Theresa May outlined proposals to be included in the Immigration Bill that would bring schools under the government’s agenda to create a ‘hostile environment’ for migrants. According to the BBC, those plans included schools withdrawing places offered to children of irregular migrant families and checking immigration status before accepting new pupils. After the then-Education Secretary Nicky Morgan expressed ‘profound concerns’, they reached a compromise, and the DfE agreed instead to collect nationality, COB and and expanded language data through schools “to improve [the DfE’s] understanding of the scale and impact of pupil migration on the education sector.” The new data collection is explicitly linked to the government’s policy to create a hostile environment for migrants, and is part of an attempt to make schools a proxy for immigration enforcement.

We ask at the letting agency

Since February 2016, private landlords have been required to check the immigration status of all adults they are letting property to. Landlords must check up every year and report tenants to the Home Office if they find they no longer have the required documents 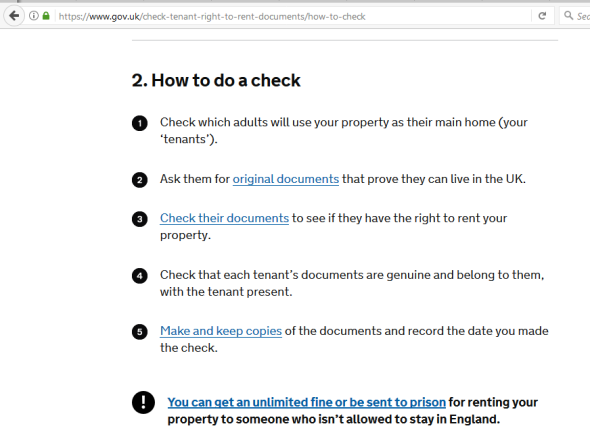 If you were not aware of this epidemic of asking, you are probably white, with a British-sounding name. Many of us will most likely never experience the impact of Theresa May’s hostile environment, but that doesn’t mean we can continue to assume we live in an accepting, welcoming country. We do not.

If we want to make our idea of ourselves a reality, we have to take action. Take a risk. Make a stand.

Here are some groups of people who are doing that. If you like the idea of the Welcome Blanket, you can help to make it less of a lie by joining and supporting them.

You can sponsor a square of the Welcome Blanket by making a donation to Thousand 4 1000, Brighton’s community response to enforced homelessness of forced migrants.

Prints and cards of the blanket are also on sale, with all profits going to Thousand 4 1000.

This campaign brings together healthcare providers and patients to resist the introduction of charging into the NHS. Download their toolkit and take action in your local area.

Against Borders for Children

Their September 2017 update has a list of clear actions you can take to disrupt the use of the school census to enforce immigration controls, whether you are a parent, teacher or anyone else.