Why is my car dressed as a ladybird?

Over the last month I’ve been spending my Sundays in various Hanover streets, sitting in a drawing of a living room, littering planets around town and dressing cars up as hills and ladybirds. It was lovely – have a look at this Facebook page, this note and (especially) this blog post to find out more about what we did.

Creating the open house made me think about…

I crocheted most of a ladybird costume for a parked car, and roped in friends and family to make the rest of it. It took about two months to make, bringing home to me very directly just how big the cars parked all over our streets are. Each ordinary car occupies around 5 square metres of land.

As well as making big things into small ones, another art work I contributed was a scale model of the solar system. The sun, represented by a balloon, was tied to the top of the open house. The planets, to scale, were ridiculously small and scattered. When our open house was in Scotland Street, the solar system extended as far as North Street towards the south, London Road towards the north-west, and West Drive to the east.

In this model, the Earth is a peppercorn. We are floating through space on a tiny fragment of rock. All the air and water on which life on this planet depends is held within a thin skin on the very surface.

London Road and West Drive sometimes seem to be worlds apart. Making this model reminded me that we all breathe the same air, we are all part of the same ecosystem.

We didn’t ask permission to set up our open house in the street, nor to make temporary use of the parked cars that form part of the landscape around here.

We were respectful of people’s need to travel, and always removed our decorations from cars if they were needed. If people needed to drive through the streets where we were (a very rare occurrence), we made space for them to do so.

However, our installations did effectively close the streets to traffic for a few hours, thereby opening them up as social, creative and playful spaces. 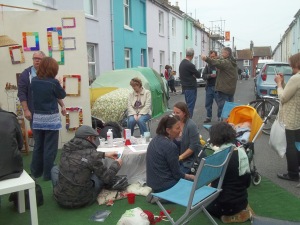 It made a change from the normal run of things, in which private individuals take control of the public street space, without permission, by lining the streets with parked cars.

What streets are for

I think that in a neighbourhood like Hanover, streets could easily be more than storage spaces for the private vehicles of just over half the residents.

They could be spaces for people to meet, talk, cycle, play, walk, scoot, skate and create. To a large extent, they already are. Whenever something like the Zocalo or the open house project comes along, people in Hanover embrace it.

But whenever a proposal is made to reallocate street space permanently for something other than car parking – for communal bins, for example – there is fierce resistance. Why is this?

I don’t know the answer, but I do know that we can’t carry on filling up our streets, our city and our planet with cars forever.

Somehow, we have to find a way to work out this knotty issue about private choices which intrude on our fragile shared environment.

It’s not just cars, of course. There is a threat to begin fracking in the Sussex countryside – an idea so breathtakingly foolish that it’s difficult to take seriously. But the energy companies truly seem determined to extract more and more fossil fuels from the Earth, in the face of all the evidence that this is the worst thing we can do. I am pleased to see Hanover residents supporting the resistance to this horrific idea.

But part of shifting towards a low carbon economy will have to be a change in the demand for energy – including for travel.

Our open house was a bit of fun in the May sunshine, but it was also about looking at things differently. How we choose to travel affects our neighbours, not only in Hanover, but all over our tiny peppercorn planet.