Are we seeing a return of Section 28?

Owen Jones published a column in the Guardian this week, collating diverse examples of a backlash against LGBT people, concluding that “progress in LGBTQ rights has not simply ground to a halt, it is screeching into reverse” and invoking “the crude, unapologetic homophobia of 1980s Britain”.

As one of the people directly involved in campaigning against Section 28, back in the dark ages of 1980s Britain, I am not convinced by this comparison. The context, the sources, and the content of the antagonism Owen points to are all very different from the 1980s. I don’t think we do ourselves any favours by glossing over these differences.

In the 1980s, public opinion was heavily influenced by the mass media. The combined circulation of the Sun, Mirror and Mail in 1987 was 8.8 million. In 2019, this total has tumbled by more than half, to 3.2 million.

Newspapers back then were able to effectively whip up hysteria, with headlines like ‘save the children from sad, sordid sex lessons’ (4th June 1986) and ‘bizarre truth about happy family in the gay schoolbook’ (22nd September 1986). With no real way of fact-checking, people were willing to believe these largely fabricated stories, built on the much less sensational fact that one copy of Jenny Lives with Eric and Martin was available for teachers to borrow from the Inner London Education Authority library.

With the shift to a more fragmented media landscape, it is more difficult to gauge from media headlines whether we are seeing a rise in hostility, such as the one we saw and experienced in the late 1980s. But research shows that there has been a profound shift in public attitudes since then.

The British Social Attitudes report 34 (published in 2017) looked at trends in public opinion on a range of ‘moral issues’. They noted that homosexuality is much more widely accepted than it was 30 years ago:

Owen identifies a range of actors, lumping them all together as aspects of “the current threat facing LGBTQ people”:

I am not convinced that this list adds up to the kind of concerted, state-backed campaign of hostility that we faced in the 1980s. In particular, I think Owen’s instruction at the end of the piece to “join the dots” is an unhelpful fabrication of alliances that do not exist.

There were indeed parents who campaigned against the alleged ‘promotion of homosexuality’ in Haringey schools in the 1980s. As now, their motivations were a complex mix of religious faith, prejudice and parental concern for the wellbeing of their children. But the Haringey parents in the 1980s had the backing of the government, mass media and public opinion, while today the parents in Birmingham are firmly outside the mainstream.

In the 1980s, Haringey Council’s Positive Images policy became mired in controversy and was eventually squashed by the introduction of Section 28 before it could even be fully articulated, let alone implemented (see this fascinating PhD thesis for the full story). The parents and politicians campaigning against it were largely opposing something of their own invention, while the council insisted that it was to be nothing more challenging than an explanation that gay people exist and discrimination is hurtful.

On the other hand, the No Outsiders programme is being delivered in schools, and it contains some concepts and ideas that I find troubling. I am reluctant to simply condemn the protests as homophobic.

In particular, I am unhappy with the presentation to primary school children of the notion of innate gender identity and the idea that sex is assigned (rather than observed) at birth.

Owen claims that Esther McVey’s comments help “shift the political conversation, reopening debates that were supposed to have been settled long ago, reviving the phantom of section 28.” I must say, the article he links to, in which a parade of senior Tories line up to disagree with her and affirm their support for same-sex marriage, is somewhat weak evidence for this idea. In 1992, we couldn’t even get the Labour administration of Brighton Council to publicly defend their own decision to give us a grant of £5,000 for our fledgling Pride event. I think the political conversation has moved on quite far.

Anne Widdecombe’s comments, quoted in the piece Owen links to, are interesting, in fact. She said:

I was always wary, back in the day, of the insistence that homosexuality must be innate and of biological origin. I feared that it could lead precisely in this direction, towards the idea that if only the ‘gay gene’ could be discovered, it could be eliminated. I preferred to argue that homosexuality was not a problem that needed solving, and that its cause was therefore not something that needed to be figured out. I wonder if our “side” having wholeheartedly embraced a ‘born this way’ narrative for both sexual orientation and gender identity has been a tactical error, after all.

Unlike the rest of the cast assembled in this piece, Owen’s “anti trans campaigners” turn out to be feminists like Julie Bindel and Womans Place UK. Here, I have a real problem with the argument he is making.

Owen claims that the pressure on the NSPCC to drop Munroe Bergdorf as a face of Childline was motivated by a wish to “drive trans people out of public life”. But the reason given by the NSPCC was that:

“The board decided an ongoing relationship with Munroe was inappropriate because of her statements on the public record, which we felt would mean that she was in breach of our own risk assessments and undermine what we are here to do. These statements are specific to safeguarding and equality.”

They haven’t explained what they are referring to, but if you read this thread on Mumsnet, you can see the concerns emerging as women discuss why they find this appointment inappropriate. First, there is Munroe’s public backing for the 11 year old “drag kid” Desmond Is Amazing and her lack of concern about Desmond’s immersion in an adult and sexualised art form. Then there’s the issue of Munroe having encouraged “trans kids” to contact her privately on Twitter and Instagram. 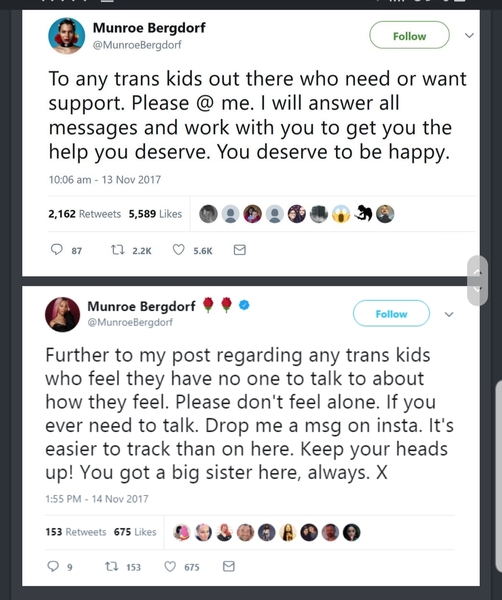 These concerns about Munroe’s lack of awareness of basic safeguarding are not about driving trans people out of public life. They are about whether she is a suitable person to represent a children’s safeguarding charity.

Owen’s final example is this:

“The anti-trans activists who hounded Bergdorf are now demanding the sacking of a senior, gay NSPCC employee because they found pictures of him in fetish gear online, suggesting therefore he is not safe around children. This is the crude, unapologetic homophobia of 1980s Britain.”

Now, I don’t care what people do in their own time. But I think women raising questions about the judgment of somebody who thinks it’s OK to engage in exhibitionist fetish play while at work in a children’s charity is not remotely comparable to the unapologetic homophobia of the 1980s, and frankly I find it a bit insulting for Owen to suggest that it is.

We were up against a powerful mass media, the whole political establishment and the law of the land. We were living in a country where three quarters of the population thought being gay was always or mostly wrong. We were living through an epidemic that was killing young gay men and coping with the stigmatisation of our community as carriers of disease. Lesbians were scared of losing their children, many of us were scared of losing our jobs, just for coming out. We were fighting for basic human rights, not the freedom to have a wank at work and share it on the internet.

Prominent campaigners like Owen Jones appearing to defend inappropriate behaviour at work because the person concerned is gay seems to me to be entirely counterproductive.

Mumsnet’s feminism chat board is not in league with Donald Trump, Anne Widdecombe or Esther McVey. Julie Bindel is not causing a rise in violence against LGBT people (quite the opposite).

Women who have spent decades fighting for feminist and left-wing causes are not leaping into bed with the evangelical right, and it is really unhelpful to pretend that they are.

The history of Section 28 is important, but it’s not the only story we can ever tell about LGBT rights. Many of the people now sounding the alarm about the direction of the movement are veterans of that campaign. Pretending that they are somehow in league with homophobes is a misleading and unworthy way to avoid confronting a real difference of opinion on the left. We can do better than that.